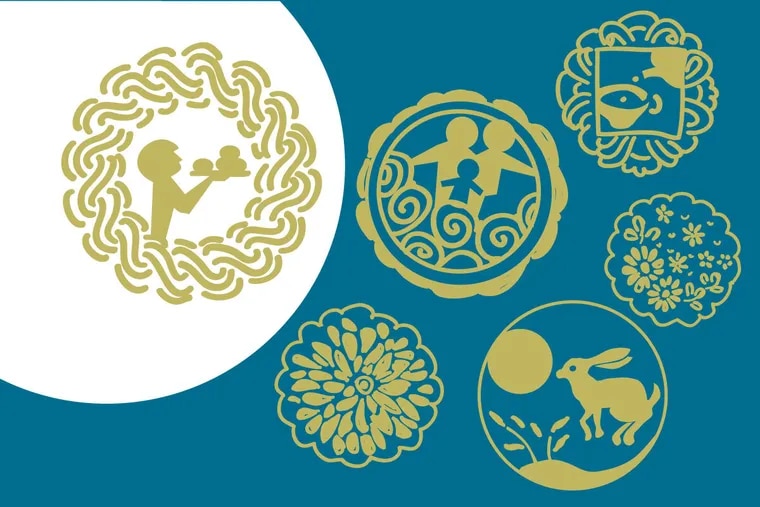 The mess of moon cakes, tradition and flaky connections

If I’m being completely honest, I never really liked moon cakes. Filled with egg yolk and lotus seed paste and traditionally served during the Mid-Autumn Festival, they always felt like foreigners to my American-born palate growing up – I was more used to treats like the cupcakes and cookies. Ironically, it wasn’t until I had a westernized version filled with coffee ice cream from a Starbucks in Shanghai on a family visit that I began to appreciate the fall confections and the history and the culture to which they are linked.

The Mid-Autumn Festival never falls on the same date every year, as it is timed for the full moon and celebrates harvest time in Chinese culture. On this day, the moon is said to be the roundest and brightest, so families come together, give thanks and pray for another prosperous year. Some varieties of moon cakes are finely molded with stunning geometric and floral designs, while others are not, but they are still meant to be eaten with loved ones, sliced â€‹â€‹and shared to symbolize oneness. and reunion.

In many traditions, the moon is a timepiece, and like clockwork, the arrival of Zhong Qiu Jie (the Chinese name for the Mid-Autumn Festival) brings a familiar feeling. It reminds me that I am always looking for answers I owe to my future self about how I will mark time and observe traditions, even though I sometimes experience cultural impostor syndrome and feel like a foreign to my Chinese roots. Am I a person who puts on a closet coat to attend a party that is not really mine?

I was born and raised in the suburbs of Chicago by two Shanghai parents. My mother stayed at home and in some ways was more connected to her Chinese heritage than my father, who attended college in the United States and lived most of his life away from his birthplace. Our unit was small – my mom, dad and I – so the celebrations have never been as grand as our family’s in China.

Am I a person who puts on a closet coat to attend a party that is not really mine?

When I think about my future with my white partner, these questions seem to loom more and more closely, imbued with the desire to connect my future children to their Chinese heritage and their grandparents, who I fear will find foreign. What happens when my parents inevitably pass away? As I get out of sync with their lore, I wonder if their death would completely sever my connection with elements of my heritage.

It is a feeling that I may have to fight if I decide to carry on these traditions for posterity.

Most of my education on Chinese culture was done in Chinese school on Saturdays. It was through this that I learned the meaning, stories and purpose of traditions like eating moon cakes for Zhong Qiu Jie; or zongzi (sticky rice stuffed with large pieces of marinated pork belly), for Duan Wu Jie; and the exchange of red envelopes, a symbol of luck and prosperity, for the Lunar New Year. Lunar New Year was always a big deal in our house, and we would put on red clothes while my mom disappeared into the kitchen for hours to braise meat, chop bok choy, and cut fruit into bite-size pieces. But at the end of the day, the three of us were still just the three of us, with the occasional presence of my grandfather and grandmother being an exception rather than a rule.

Because our identity was primarily that of a fundamentalist Christian variety, many Chinese fables associated with these holidays were filtered through a Christian lens. My parents strongly insisted that the deities I learned in Chinese school were not real characters, but fictional ones.

Regarding festivities like Zhong Qiu Jie, our participation was to offer and receive moon cakes and to organize a dinner with friends from the church. On rare occasions, my mom could go to the trouble of baking the Suzhou-style moon cakes associated with the city near Shanghai, with a savory pork filling neatly packed in layers of puff pastry crust. These gatherings were often indistinguishable from other church potlucks, where participants gave each other gifts of food, fruit, and red envelopes. The Chinese holidays seemed somewhat flat and less important than the Christian holidays where we did a bigger task like Christmas and Easter. Because these cultural traditions seemed less of a priority, I felt estranged from them as I grew older and left the nest.

To celebrate Zhong Qiu Jie now as an adult, it would be up to me to get the moon cakes or cook a feast. And who would be there to celebrate with me? My friends are diverse, but largely disconnected from Chinese culture. And I broke up with the people I grew up with, so this band is out of the question. Leading the charge to celebrate holidays like Zhong Qiu Jie painfully shows that I am the only one to grasp the rapidly unraveling rope that binds me to the culture I was born into. As an only child, I both feel overwhelmed with the responsibility of carrying on these traditions to honor my parents knowing that I don’t necessarily have to. I struggle with questions about the traditions that belong to me, what my relationships are and if I want to carry them on in my life.

I know that I am not the only one deciphering which traditions of my parents I would like to keep. Whether related to race, religion or region, there are traditions that many people break and reform to exist in a way that is more meaningful to themselves. Even moon cakes have taken on new forms with flavors that span the gamut from egg cream and chocolate to ice cream toppings inside the mochi and even the outside of cookies. Many of these are made by second-generation Asian Americans, who are also redefining their relationship with this traditional food and its vacations. Some people are even creating them as a form of solidarity and pride to fight the wave of anti-Asian sentiment that hit our communities during the pandemic.

Breaking down, examining and rebuilding is a muddy process. And like the moon, I go through phases. Sometimes I forget that there are vacations until the internet reminds me of it and other days I plan the exact outfit I wear and the things I bring to visit my family for the date on my calendar.

I haven’t decided what to do with Zhong Qiu Jie yet. The only thing I can commit to is gazing at the moon and quietly acknowledging the passing of another year with no concrete answers.