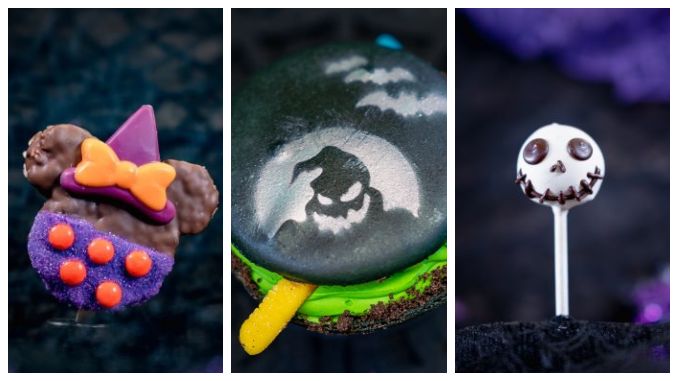 When we were kids, Disney parks were all about one thing: rides. As we got older, however, we realized that there was so much more to places like Disneyland. Yes, Space Mountain is as exciting as ever, but there are also great restaurants, entertaining shows, spectacular parades and fireworks and, perhaps most important of all, fantastic unique treats.

No matter how big your sweet tooth is, there’s something for you at Disney Theme Parks, and it’s truer than ever during the Halloween season. We tried a variety of these special treats on a recent visit there; if you’ve been planning on stopping by the parks in the past two weeks, here are the six treats we recommend the most. And what’s great about them is that they’re not exclusive to the Oogie Boogie Bash party; you can buy these candies at Disneyland or at Disney’s California Adventure anytime between now and Halloween. If you’re heading to Disneyland Resort in the next couple of weeks, be sure to try at least one of these delicious desserts.

Here’s a churro that’s been drizzled with green and purple sauces, then coated in “fruity sugar.” In other words, it’s like breaking a box of fruity pebbles and pouring dust over a churro with icing on it. And to top it off, you can only buy it from an oversized traffic cone that currently has the creepy face of a howling ghost on it. I don’t know if the goodies can ever get better than this. It’s a bit of a sugar rush — okay, a huge sugar rush, about as fast and furious as the end of Radiator Springs Racers, but the churro grounds it all and keeps it from becoming pure sugar overload. This gets our highest recommendation possible.

We’re no strangers to the fried goodness of funnel cake, but none of us have ever tried funnel cake. fries before. It’s not much of a shock that something that combines two of the best foods of all time turns out to be absolutely delicious. Each fry tastes like a funnel cake, and they’ve all been smothered by a little avalanche of sweetness. You’ll find cookie chunks, green whipped cream, gummy worms, and other candy on the fries, all of which have been coated in crisp Oreo-style cookies. It’s a bit overwhelming, a bit tough and messy to eat, but every bite is worth it and it’s perfect to share.

Despite the name, this treat isn’t just available during Oogie Boogie Bash. You can find it all day long at Fiddler, Fifer, and Practical Cafe, and find it you should; it’s not only cute, but it’s also good. It’s a chocolate macaroon bursting with caramel, cookie powder, brownie crumbles, green apple buttercream and a few thoughtfully placed gummy worms. It’s not the easiest to share – the whole contraption may fall apart once you bite or cut it – but it’s still one of the best treats you’ll find at Disneyland Resort. during Halloween. If you are embarking on Disney’s California Adventure in the next couple of weeks, be sure to give it a try.

Available in DCA and Disneyland

Yep, that’s okay – it’s hard to spoil what is essentially a chocolate-covered Rice Krispies treat. If it wasn’t good, he wouldn’t be on this list. What makes Great, however, and a staple, in our book, is how adorable it is. Check out this thing above! It’s the only treat that dares to ask “what if Minnie Mouse was actually a delicious chocolate covered treat in a cute witch outfit,” then responds with one of Disneyland’s tastiest candy. You can find it at four locations within the resort: Bing Bongs and Trolley Treats in Disney’s California Adventure, and Candy Palace and Hunny’s Spot at Pooh’s Corner in Disneyland. You can also pick one up at Marceline’s Confectionary in Downtown Disney, if you don’t plan on going to the parks before Halloween.

There’s really no special magic here: it’s just a reliable and delicious cake pop, with an incredibly sweet layer of vanilla frosting around a chewy, chewy ball of cake. Sometimes you don’t want a surprise or a dazzling combination of flavors; sometimes you just want something that tastes reliably. This is the Jack Skellington pop cake. It also looks really good – I mean, Jack already looks like a cake pop anyway, so it’s a perfect choice for a treat like this. You can try this one out for yourself at Trolley Treats at Disney’s California Adventure, Candy Palace and Hunny Spot at Pooh’s Corner at Disneyland, or at Marceline’s Confectionary in Downtown Disney.

Available at the Galactic Grill at Tomorrowland at Disneyland

This Star Wars themed perfect will turn your taste buds to the dark side. The Darth Vader helmet and lightsaber on top will catch your eye – both are chocolate, of course – but the main course is inside, with a red velvet cake and chocolate cake sharing a space with a dark chocolate mousse and a ganache. There is even a layer of cookies. Who would have thought that space fascism could be so delicious?

Allyn Moore is a freelance writer and frequent traveler.