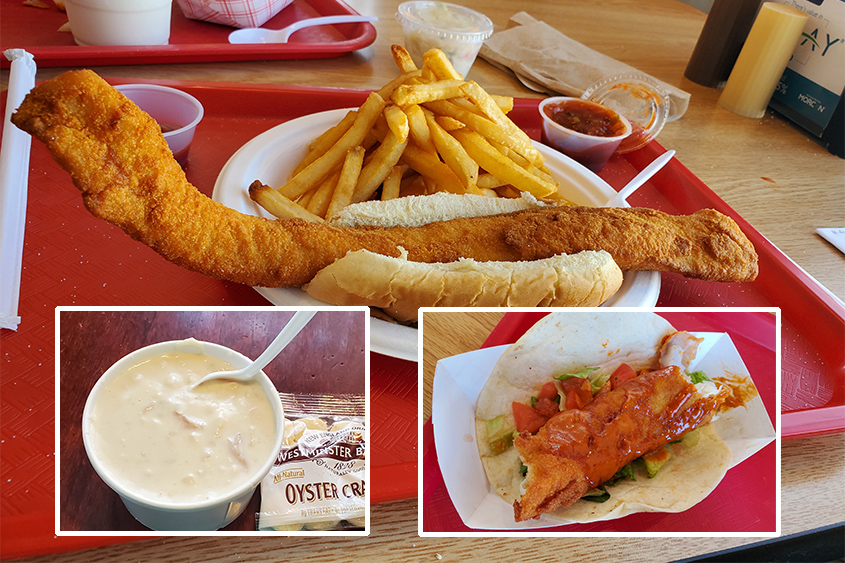 My friend Mary has been going to Ted’s Fish Fry since the 1960s. Sheryl joined me for lunch and remembered buying takeout from her office in the 1980s and bringing her boys, now adults, in the 1990s. In a remarkable feat of oversight, I had never been to a Ted’s in all the years I lived here.

So Sheryl and I went, and we can tell you Ted runs a tight ship. At least at the Clifton Park location, which is being renovated. Short story: spotless, reasonably priced, courteous staff, delicious food. Now let’s get to the details.

A little background: Ted’s Fish Fry is an American dream story. Ted Deeb’s parents emigrated from Lebanon and Ted worked hard in various freelance businesses until he came across an outdoor fruit stand. He turned it into a snack bar, then moved to Third Street in Watervliet and opened the first Ted’s Fish Fry in 1949. The rest is history.

Today, his son SK Deeb is the president of the company and runs it with the help of his son, Bill Deeb. There are seven locations now; the latest opened on Western Avenue in Albany in September 2020. It’s the only place that serves wine and beer.

The Clifton Park location is just off the side of Route 9, with a giant red sign near the highway. You could say my phone, and Sheryl’s too, because they both took us to the neighborhood right behind Ted’s parking lot. You could see him on the other side of the fence. “Does the Garmin girl play games with us?” Sheryl asked.

We arrived around lunch time and despite the sign on the door asking us to forgive them for the construction, we entered a restaurant that was sparkling white with vibrant red trim. Booths and chairs are black. Everything looks new. No construction dust.

We were greeted immediately as we perused the menus on the big fancy screens and the clerk was ready to take our order the minute we decided. He turned and gave instructions to the crew in the open galley. In no time, we were heading to our table, red plastic trays in hand.

The kitchen is right there, behind the counter and the stack of plastic bakery trays full of rolls. And here’s the thing: it was all business in Ted’s kitchen. Once the order was given, the employees went to work until they were done. No drama, no fuss.

We settled into a cabin and Sheryl brought us ketchup and straws from the spotless condiment station. There were several other groups scattered around the dining room; with windows on three sides, it is a sunny and cheerful place. We gazed longingly at the snow-covered picnic tables.

” It’s not good ? Sheryl asked, slipping on her paper boat of onion rings ($3.50, small) for me to try. The onion rings were tangy, crumbly and delicious, with bits of golden onion showing through in spots. The coating, a special house recipe, incorporates cornmeal and is very crispy.

I reviewed Ted’s signature fish fries ($10.90 for the lunch entree that included fries, coleslaw, and a medium fountain drink), browned and spread the length of the platter. Her bun looked skimpy, like a bikini that was way too small. “How can I eat this? ” I asked.

“You break the end,” Sheryl said, demonstrating in the air, “and dip it in chili sauce.” I broke. It came off in a neat piece, revealing huge white flakes. I dove. The red chili sauce has peppers, no meat, and some other stuff that I don’t usually eat, like pickles. I liked them, both fries and sauce.

“Look at those big flakes,” I say, pointing inside. I couldn’t finish it and left most of the scroll too.

The Fish Fry Coating also includes cornmeal and has enough structure to hold the incredibly light and flaky fish together until you bite down.

We both liked the fries – they are all bargains. No seasoning, no coating, no skinny cords. Just straight potatoes, neatly arranged next to the fry. We added salt and happily dipped in ketchup.

Sheryl had a fish taco ($3.50), about half the size of a fried fish, she estimated. The breaded fish sat on a bed of fresh lettuce and chopped tomatoes, and was topped with a sauce she called “Spicy Mexican.” Ted calls it chipolte cream. It’s okay, she decided.

The coleslaw, she thought, left something to be desired. It was a bit dry.

My lunch special came with a medium fountain drink (quite large in real life). Sheryl had a small milkshake ($4.15), vanilla. She passed it; it was sweet and frosty, with a strong vanilla flavor. Yum. More dessert than drink, at least for me.

The tab for our two lunches, other than the few dollars that went into the tip jar, was $23.59.

But wait, there’s more. Husband Eric quits mate work unless it’s a fancy joint so I didn’t consult him when planning my visit.

“Hmm, Ted’s?” he mused, thinking back to when he worked at the Lansingburgh Boys (now Boys & Girls) Club at university. “I haven’t been there in ages, but I’ll have a burger and a chocolate shake.”

I drove to the nearest Ted at dinner time and picked up the order, along with a little cheesecake ($4.25) and a cup of clam chowder ($4) .

Mealeo takes care of deliveries, and you pay the same premium if you order online and pick up in store. Ted said to call the store to place your order. You can skip the line when picking up your food. But they recommend eating in: Food is best eaten fresh.

“It was better half a century ago,” Eric said of his cheeseburger ($2.95). Part of that is nostalgia, I think. The other part is that they forgot the cheese.

However, the New England clam chowder contained lots of chopped clams, was creamy and tasted great, he said.

The shake, Eric said, was “nice, delicious, sweet. I love the chocolate syrup at the bottom. And, “as good as I remember.”

It’s that time of year when you might not be eating meat. You won’t miss it at Ted’s.

So many decades, so many fish fries. They were good then, and they are good now.

“You’ll be back,” Sheryl said, over our lunch. She’s right.

Caroline Lee is a freelance writer living in Troy. Join her at [email protected].

More from The Daily Gazette:

I was rejected by Dragons’ Den but now my cookies are on sale in Co-op and my business is worth £600,000

Can you get a mortgage if you have bad credit?