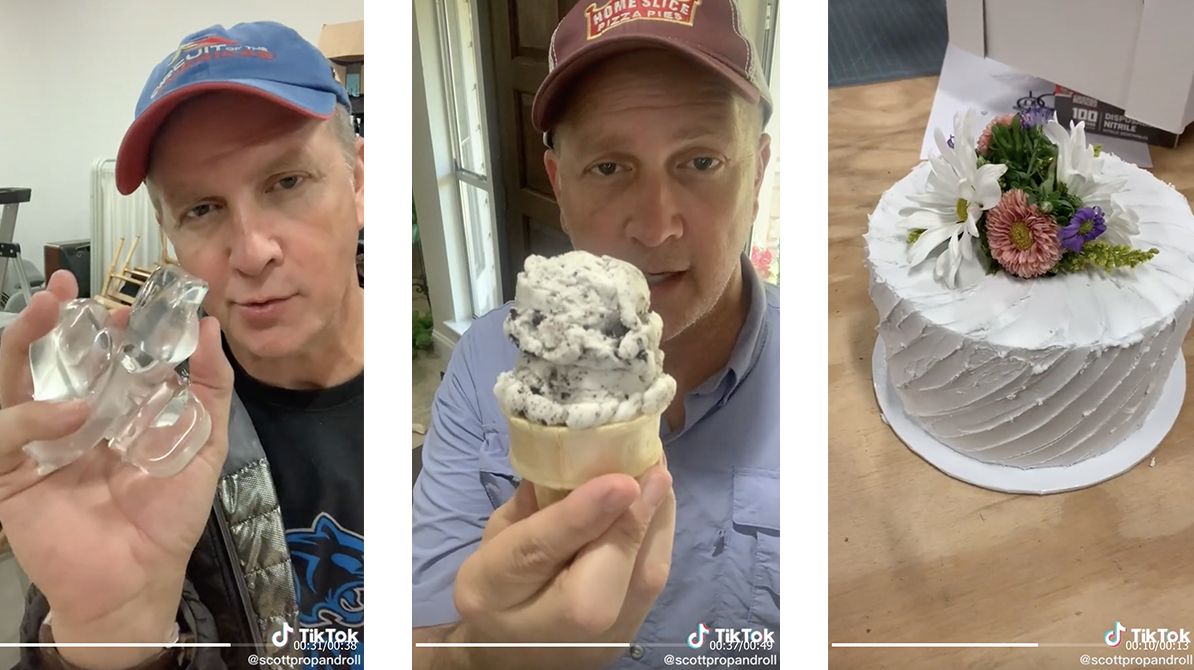 Have you ever wondered why ice cream doesn’t melt in the movies or if the characters drink real alcohol? Food is a particularly fascinating part of prop design. Although the prop food looks like the real deal, it’s completely artificial. Even the manufacturing process is a radical departure from traditional cuisine. That’s because the goal of prop food isn’t to taste good, but to look the same during a 16 hour shoot for a 30 second scene. If you’ve ever wanted a behind-the-scenes look at prop food, professional film and TV prop master Scott Reeder reveals all on his TikTok account. Here are five unexpected prop food recipes that hit the big screen!

Ice Cream’s penchant for melting can be a continuity issue when shooting the same scene multiple times. This need for consistency is why Reeder uses a special recipe to make fake ice cream that will retain its shape take after take. Reeder combines powdered sugar with vanilla cake frosting until the consistency becomes similar to bread dough. For a cookie and cream cone, Reeder adds crushed Oreo cookies to the mix. Once the texture resembles ice cream, pour the mixture into a cone, and it’s showtime!

According to Reeder, who loves puns, making this prop is a “piece of cake.” This no-bake faux cake is made by using a cake knife to spread a light spackling on a round cylindrical piece of styrofoam. Once topped with a small floral arrangement, this cake is ready for its close-up.

Acting is a job like any other, so drinking on the job is not allowed even if the stage calls for it. This is when Reeder uses his prop magic to make whiskey by combining caramel food coloring with water. All beer and wine have been stripped of alcohol, and if a character drinks canned beer, Reeder will wrap a fake beer label on a can of sparkling water.

Rubber ice cubes help shots stay solid between camera angles. Reeder’s recipe for rubber ice is to mix equal parts SiliGlass A and B compositions. After about a minute of stirring, Reeder pours the mixture into an ice cube tray and lets it sit for 20 minutes. Then the ice cubes are ready to bounce to take.

“Let’s” is a brand of potato chips that has been used in hundreds of TV shows over the past 20 years, according to Reeder. But Hollywood’s favorite chips don’t really exist. Its name is a nod from designer Marvin Mancia to his friend and colleague Lettie. The bag is made of vinyl, so it’s quiet, making it easy to record dialogue. The use of fake brands in film and television also avoids any conflict of interest in advertising.

In The Know by Yahoo is now available on Apple News — follow us here!

Listen to the latest episode of our pop culture podcast, We Should Talk: