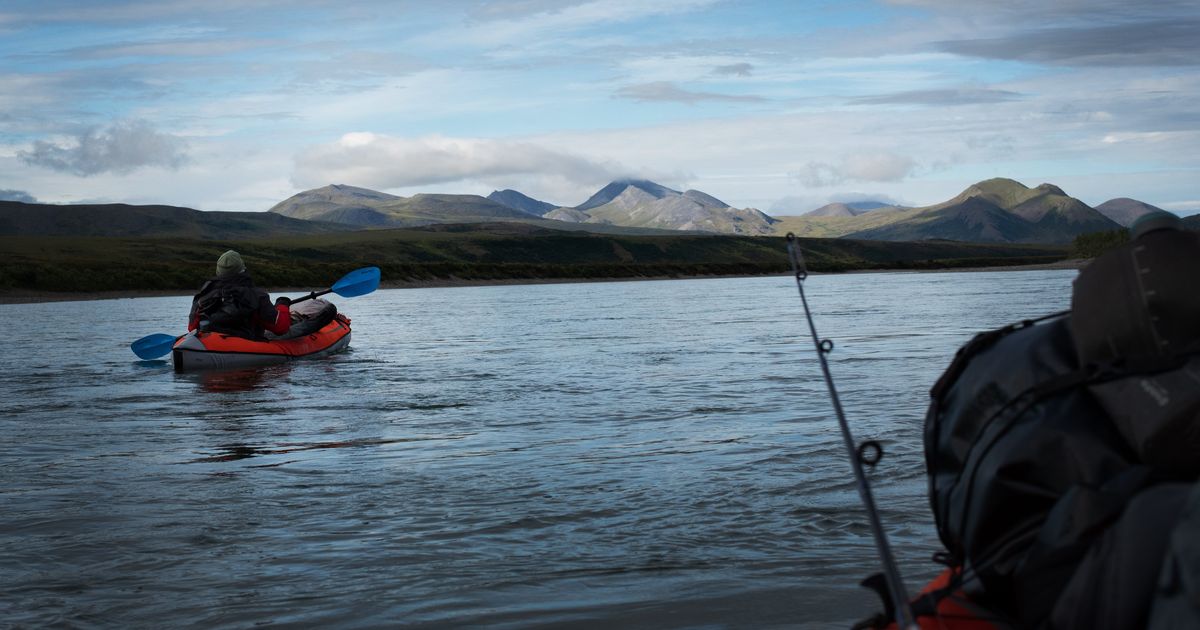 This is the fourth in a four-part series on kayaking the Noatak River in the Arctic Circle. The river, which anchors the largest undeveloped watershed in North America, flows from its headwaters at the base of Mount Igikpak in the Brooks Range, through the gates of the Arctic National Preserve and the National Preserve by Noatak. Together, these two protected areas are almost seven times larger than Yellowstone National Park. This month, Spokesman-Review Outdoor Editor Eli Francovich kayaked the Noatak River with Spokane natives Chris and Cary Kopczynski and Jim Wood.

August 9 – I caught a chum salmon – its teeth grinding in protest – standing in the rain at the confluence of the Noatak and Nimiuktuk rivers. Cary Kopczynski took a picture and we released the fish, which was a spawner and almost returned to its native stream.

I thought about this fish and this catch. I never understood the appeal of fishing, never understood its obsessive appeal. Today I tasted. The capture was thrilling, but the simple act of throwing into the unknown sticks with me. The hook and line transports a bit of my consciousness into another world, a probe into an alien aquatic realm that I will never truly know.

We are nearing the end of this journey, each turn bringing us closer to humanity. The signs are everywhere. Yesterday, a motor boat passed our camp, going up the river against the current. This morning we paddled past a ramshackle cabin, an old climbing rope hanging from the porch. The front door is closed, the nails protrude (keep animals away?). Six snowmobiles are slowly rotting in the back. I feel melancholy. The normal sadness of any adventure that ends, certainly, but also a greater and deeper nostalgia.

What did I forget? Or more exactly, what have I never known?

Throwing into the Noatak River, I realize how little I know about animals and waterways, how rarely I have been in a landscape that is unsuitable for human use. Living as I do in the Pacific Northwest, I’m surrounded by natural beauty – mountains that make my east coast friends drool, foaming rivers that seem untamed by European waterways – but these mountains are criss-crossed by roads and those rivers dammed and siphoned high and low. An easy fact to forget on a beautiful spring morning in Spokane.

Now, as I sit in the tent and listen to the wind flapping the nylon, I think of environmental amnesia, a term coined by a University of Washington psychologist who hypothesizes that we humans, a species famous for its flexibility, we get used to what we see regularly and forget what we don’t. Which basically means we’ve forgotten what a river looks like without dams. We have forgotten what a mountain range without roads looks like or the smell of a high altitude desert strewn with sage. I generally have no patience for environmental desperation or for those who act as if humans are somehow separated from the “natural world”, but right now I’m struggling to find a silver lining to our amnesia.

August 10 – Today we come across a small caribou, not a baby but maybe a year old. While having lunch, we watch him swim across the river to the shore on which we stand. We walk away and drift taking pictures. He looks at us intensely and returns his gaze, fixed. In fact, I watch it so closely I almost miss the move, 100 feet behind near where the tundra meets the river rock. I scan the rocks and then I see him, a gray wolf crawling on his belly towards the ungulate.

Almost simultaneously, the wolf sees us and stands up, surprised. Now the two animals watch the four passing humans. The wolf retreats into the brush and melts. Written descriptions of wolves always describe them as blending into the woods, a cliché and yet there’s no better way to describe it. We pass the caribou and the animal begins to go up the river. The wolf, presumably, is waiting.

August 11 – We cross the Noatak Canyon, its steep walls revealing geological time. Chris Kopczynski, a great lover of rocks and geology, is over the moon. At every turn, he shouts with delight, describing the geological processes that created it all.

“I love the rocks,” he says, perhaps the trip’s understatement. “I really like rocks. They all tell a little story.

The river is flowing fast and we are having a good time, the canyon walls are rolling by. It is warmer than it has been for the past few days, although it is still humid with occasional gusts. We pass more cabins. We think we have two days to the village of Noatak. The village is about 60 river miles from the Chukchi Sea, but obviously the flow slows considerably and the prevailing ocean wind makes this last stretch difficult and unattractive. Chris and Jim Wood will depart from Noatak. Cary and I discuss whether to push out to sea.

We pass another camp towards the end of the day. A lone rower. As we stop, we chat and, surprisingly, discover that he is from Spokane. His name is Mike Poppin and this trip has been in his dreams for years. The partner he was going to do it with got injured so Mike decided to go solo. He is going slow and plans to push out to sea as he still has a week left.

August 12 – The final bend. A metal frame. The first sighting of the village of Noatak. It couldn’t happen sooner. I’m soaked. The rain seeped into my shell and my down jacket – always a mistake in Alaska I am told – is wet and useless. Without fanfare, Cary and I let go of our fantasy of paddling out to sea. But after about 400 river miles, Noatak Village looks like a wonderful endpoint.

We pull our kayaks onto a gravel beach, alongside other watercraft and at least two snowmobiles awaiting winter, and stumble up the hill in search of the general store. Thoughts of cookies and bread fill my head. Under normal circumstances, the store would be nothing special. It is devoid of products and there is no milk. But after 16 days outside, any structure enclosed with heat – let alone food – seems magical.

We stand there, dripping, overwhelmed by the culinary options. The hot dogs! Frozen burgers! Treats! Instant noodles! Gathering a weird assortment of things (Sausage, Top Ramen, Candy, Chips, etc.). we meet at the checkout and ask if there’s a structure in town we can sleep under for the night.

The cashier thinks then starts to call someone, that’s when Ricky Ashby intervenes. A white-haired native, he tells us we can stay at his place, which is about a quarter of a mile down the river. It’s blue and near the airport. Give me 10 minutes, he says, and disappears.

So we leave in the rain and go up one last time in the kayaks. As promised, going down the river and back up the bank, we see the blue house. As we parked and started to unload, a little boy and a girl ran towards us. The girl is holding a slice of salmon.

The next hour is a blur of activity. Deflating the kayaks, hoisting our gear up the hill and into Ricky’s little locker room, then, finally, entering the little house. Ricky has prepared a wood fire and we change into dry clothes. It’s a small house and has no electricity or running water, but it’s clean and welcoming. Ricky makes us coffee and we sit and talk. He is in his sixties and was born in the village. Now he divides his time between the sea, the village and the deep interior.

“I’m subsistence,” he tells us, which means he lives mostly off the land. Caribou hunting. Catch the salmon. Pick berries. He has also traveled extensively. Tell about the countries and cities he has visited.

We all feel accomplished. Proud of our trip. Our success. But as we talk to Ricky, we find that we’ve barely sampled this land. His cabin, for example, is 50 miles up the Noatak River. In winter, a time of year when there is no sun and temperatures regularly drop to minus 30 degrees, he walks there alone. In fact, he spends most of every winter in this cabin, listening to the world freeze. And wolves, someone asks. Wolves make me walk faster, he says.

He tells us about the changes he has seen in his 64 years. Plants that had never grown this far north before. Animals too. He shows us woolly mammoth bones preserved in the permafrost until the Noatak River eroded the land and exposed these ancient artifacts. He shows us a belt made of bear teeth. Walrus ivory handle knives. All made by him. All gathered or driven from this land.

“You’ve had experiences,” Cary says at one point in the evening, to which Ricky replies, “You live your life in the city and you have experiences too. It’s no different.

Eventually we were all asleep, Ricky in his bed and the four of us in sleeping bags strewn on the floor. In the morning we wake up and catch a plane back to Kotzebue and a day later we head to SeaTac and then land at SeaTac, the roads and lights of Puget Sound being overwhelming even at 10,000 feet.

But before all that, in these final hours with Ricky Ashby, my sadness at what I’ve forgotten, what most humans have forgotten, fades. Of course, we live in a degraded world. The one in which the rivers are dammed. Poisoned waters. Habitat indented by roads and subdivisions and wild ecosystems like the rare Noatak.

But Ricky Ashby’s stories fill me with hope. There are people, mainly indigenous people, who have not forgotten. I am thinking of the work done by the Colville tribe, the Nez Percé, the Coeur d’Alènes and the Kalispel. All battling environmental amnesia. All pointing to what was and what still can.

And like anything worthwhile, those endeavors start with connection. Connection to place, animals and people. At some point during this last evening, we ask Ricky about another river drain in Alaska, one further south.

His answer is frank and illustrative: “I don’t know this country”, he says. “I didn’t walk it.”