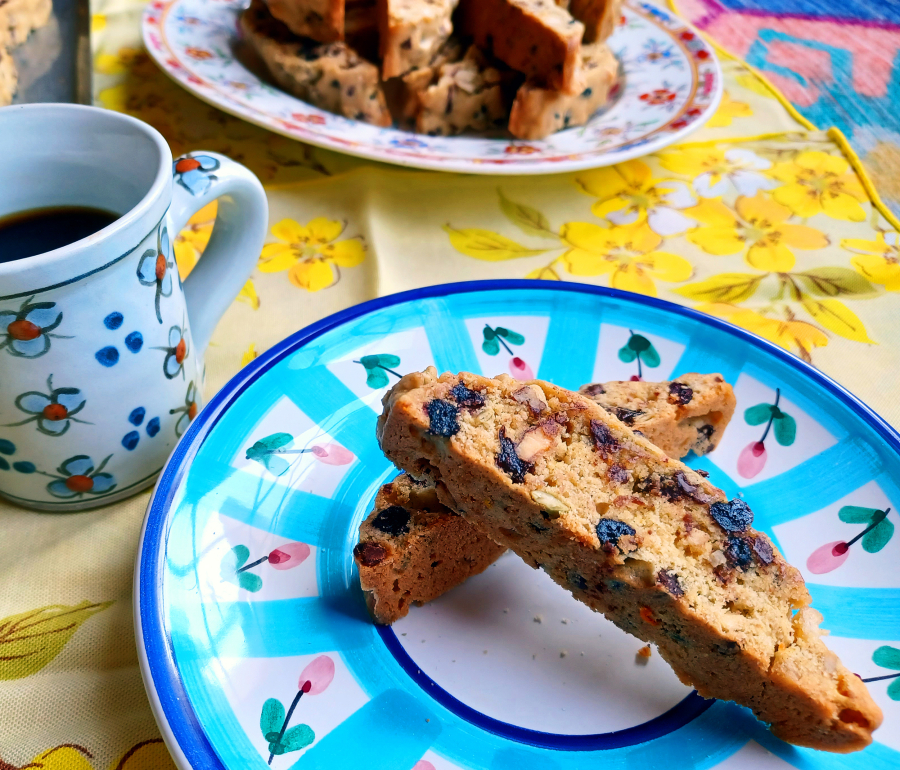 Hit the trail in Clark County or beyond with biscotti

Our family is about to leave for a week’s vacation. We will be traveling by car for several days and it is always nice to have snacks for the road. We typically pack apple and pear slices, crackers, grapes and dried fruit. This time I thought I would do something special for our trip and also to give to a friend we see en route to our destination. I did a quick search to see which cookies travel well and keep the longest. Shortbread and biscotti topped the list. I made shortbread not too long ago but I’ve never made biscotti, although I really like small, hard, crumbly cookies. They’re not overly sweet, have interesting blends, and taste delicious when dunked in strong coffee.

I was intimidated because traditional almond biscotti recipes involve almond flour and a double-baking method that sounds complicated. You might think I’m an ambitious cook, but it’s hard to overstate how much I hate anything that involves excessive effort (or even moderate effort, for that matter). However, I have found many recipes that use plain unbleached flour and common ingredients. After reading carefully, I’ve concluded that some biscotti only require about the same level of effort as, say, sugar cookie cutouts, which I almost always mess up because I unroll them unevenly and that I distort the shapes when I arrange them on the cookie sheet. I decided that if I could ruin the sugar cookies, I might as well ruin the biscotti, so might as well give them a try.

I heated the oven to 300 degrees and used a hand blender to thoroughly mix ¼ cup olive oil with ½ cup loose brown sugar and ¼ cup granulated sugar, 1 tbsp vanilla extract, 1 teaspoon of almond extract, 1 teaspoon of dried orange zest and 2 eggs. I used extra virgin olive oil because that’s what I had on hand, but the strong olive flavor can overwhelm the other flavors, so you’ll probably want to use a milder oil. I pretended to be an Italian girl baking biscotti in the sunny kitchen of my Tuscan villa surrounded by olive and fig orchards. It could happen, except for the young part.

In my real life, I haven’t had time to go to the store and we don’t have any fig orchards, although my kitchen is relatively sunny and has a decent southern exposure. I took everything out of the pantry to see what kinds of things might taste good in biscotti, or if not good, at least adequate. I needed a total of 2 cups of mixes. Here’s what I found: Banana chips and dried blueberries from the no-bake granola bars I made recently, plus some raisins and mini chocolate chips. I discovered about 2 tablespoons of pecans in the bottom of a bag lodged behind boxes of macaroni and cheese. I also had three small packets of salad kits containing toasted pumpkin seeds, dried cranberries and almonds. There was an extra packet of small pieces of nuts, but even after tasting them I couldn’t tell what they were. Nuts, maybe? Or hazelnuts? In any case, they weren’t stale, so they went to the biscotti!

In another bowl, I whisked together 1 ¾ cup flour, 1 tsp baking powder, 1/2 tsp salt, and ¼ tsp allspice. I added the flour mixture little by little to the mixture of oil, sugar and eggs. It got a little stiff but my mixer could handle it on low; I imagine it would work just as well with a wooden spoon. Then I added my 2 cups of dried fruit, nuts, and chocolate chips and stirred until everything was evenly distributed in the batter.