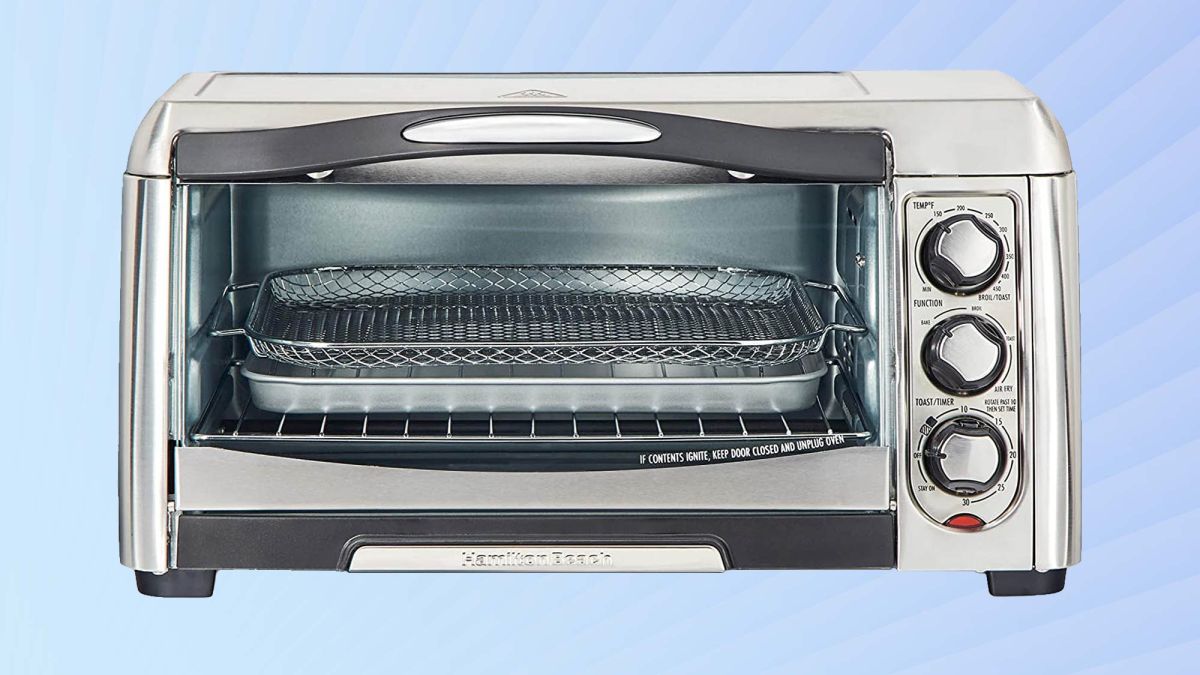 If you’re working on a budget and don’t have a lot of extra counter space, the Hamilton Beach Air Fryer Sure Crisp Toaster Oven will give you grilling, baking, broiling and deep-frying capabilities. look in a compact package for a reasonable price. However, you won’t get the great performance and extra features you find on more expensive models.

This Hamilton Beach model is a great choice if you often toast, reheat frozen pizzas, whip up breaded chicken for the kids, or if you only cook for one or two. If you are looking for a second oven this is not the one for you as it does not do a good job on baked goods and cannot accommodate a whole chicken. For the full description, here’s our full review of the Hamilton Beach Air Fryer Sure Crisp Toaster Oven.

The Hamilton Beach Air Fryer Sure Crisp Toaster Oven is available at Target for $ 84.99. It is available in brushed chrome finish.

While the Hamilton Beach Air Fryer Sure Crisp Toaster Oven has a contemporary brushed chrome housing, it has much the same design as toaster ovens of decades ago. It has a glass door with a small handle on the top that opens downward and three dials that act as controls. At just 9 x 18 x 14 inches, it fits easily under a cabinet and doesn’t take up too much space on the counter.

When we tested its air fryer functionality, the Hamilton Beach did a good job of crisping and browning breaded chicken breasts. Although the Brussels sprouts and frozen fries didn’t come out perfectly, they were quite crispy. However, when it comes to homemade fries and chicken wings, it didn’t add up to much browning and crispness. Grilled burgers don’t sear particularly well either. Using the Bake function, we baked a cake and cookies which each came out very dark and, in the case of the cookies, dried out. A frozen pizza baked well on top, but the bottom crust was soggy in spots. This toaster evenly toasts slices of white bread and bagels. The performances were therefore a little uneven, but satisfactory on certain recipes.

There is no preheating feature on the Hamilton Beach. For some functions, the manufacturer recommends heating the oven for 5 minutes before cooking. However, preheating is not recommended for air frying and therefore some cooking times were longer than on other models.

As in other toaster oven air fryers, a shallow basket is provided to air fry food in a single layer. We were very pleased with the browning and crispness of the breaded chicken breasts. The Brussels sprouts and frozen fries came out lightly browned and crispy. However, neither the chicken wings nor the fries produced the kind of results we would expect from fried foods.

We used the Broil setting to cook four 4-ounce burgers. Despite taking 18 minutes to cook at medium heat, the burgers were grayer than brown, although they were chewy and juicy.

The oven is large enough to hold a 9 inch cake pan. While a moist and tender baked yellow cake in the recommended time, it did not rise very high and the top crust was quite dark and uneven in color.

The chocolate chip cookies browned very evenly, but were very dark and dry on the inside. Despite its small size, the Hamilton Beach was large enough to heat a 12-inch frozen pizza. It came out browned and bubbly on top, but the bottom crust was soggy in places.

The Hamilton Beach only has medium and dark toast settings. On medium power, it toasted both white bread slices and bagels in 2:50 minutes, as fast as a pop-up toaster, and toasted very evenly.

While it can grill 6 slices at a time, in our testing it didn’t brown the slices on the front as evenly as the ones on the back.

There are no electronic controls on this toaster oven. It has three small dials: one to select the cooking function, one to set the oven temperature and the third to set the cooking time. While it is certainly simple to use, the printing on the dials is very small and we struggled to read the settings. Also, since the time setting dial is simply a mechanical timer, it is difficult to set precisely. An oven rack, air frying basket, aluminum baking pan and sliding crumb tray are included with the oven. There is no light in the oven for you to see how your food is progressing.

When the oven is in operation, the glass door becomes excessively hot, reaching temperatures as high as 339.2 ° F. The Hamilton Beach is the only toaster oven we tested with a door handle that gets very hot to the touch at 146.8 ° F. The oven is extremely quiet as it operates with a dBA reading of 50.4; we could hardly hear it when it was running.

None of the parts are coated with a non-stick finish and hand washing is recommended. The aluminum baking pan got quite stained and we couldn’t clean it completely.

The instructions supplied with this product are contained in a package leaflet. Although it explains the use in detail, it does not include any cooking charts, recipes or tips.

The Hamilton Beach Air Fryer Sure Crisp Toaster Oven is considerably smaller and less expensive than other models we tested. It does not come with electronic controls and many sophisticated features and settings. However, it is simple to use. While its cooking performance is underwhelming, and it’s not big enough to roast a chicken, it glows at the grill and does a believable job of air frying.

We think it’s a great choice for people who are looking for a traditional toaster oven primarily for toasting all kinds of bread, heating frozen pizzas, and frying chicken nuggets or frozen fries for kids. This is not the model for anyone looking for a replacement for their full size oven. It’s much cheaper than any other toaster we’ve tested – considerably less than our winning toaster, the Breville Smart Oven Air Fryer Pro. Performance is a bit hit and miss, however, so be prepared to compromise.