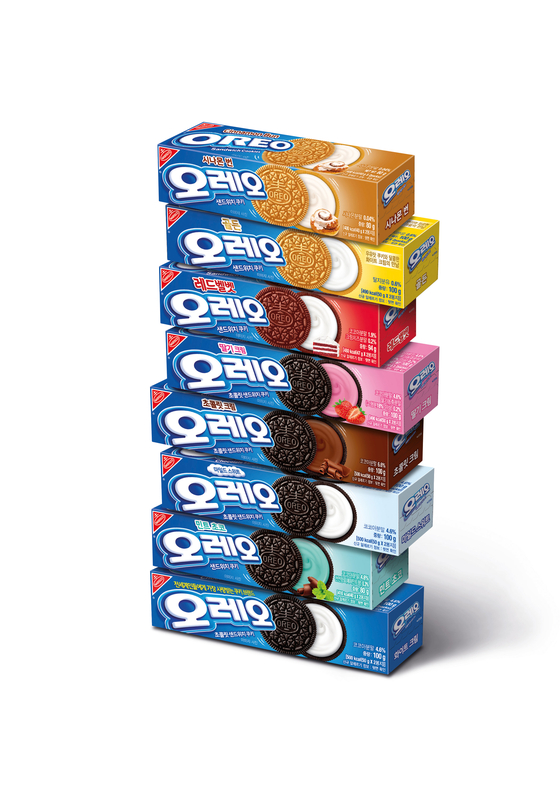 For young Koreans in their 20s and 30s, weird flavors are all the rage. This recent shift to more adventurous shopping has led manufacturers to launch bold, unique products in an attempt to appeal to Gen Z thrill-seekers.

Dong Suh Foods Corporation, which is in charge of manufacturing the local version of Oreos, is also tapping into this trend with a new line of uncommon Oreo flavors.

Dong Suh Foods recently launched Oreo Cinnamon Bun Sandwich. Released in July of this year, these Oreos taste like cinnamon rolls, a new flavor to the snack market. Crispy Oreo cookies include a generous amount of cinnamon power, turning it to gold. The sweetness of the thick icing spread between the cookies makes this snack the perfect match with a whole range of drinks, including coffee or milk.

The packaging of the innovative Oreo is also carefully designed to effectively reflect the identity of the cookies. Oreo’s signature blue box turns gold on one end to remind shoppers of a cinnamon roll and emphasize the product’s features and flavor. Dong Suh Foods also promoted the new Oreos through a series of online and offline events.

First introduced to America in 1912, Oreos are the best-selling sandwich cookies in the world. In Korea, Dong Suh Foods has helped boost that number by experimenting with Oreos and Oreo Thins, which are about 43% thinner than the original cookies.

Oreo bestsellers include raspberry mousse, red velvet, salted caramel, tiramisu, and white cream. In particular, Oreo Thins Raspberry Mousse is an attempt to apply the sophisticated flavor of raspberries not only to desserts like cakes or macaroons, but also to cookies. The light texture of Oreo Thins pairs well with the raspberry frothy crema, providing a sensational sweet and sour experience with your afternoon tea or coffee.

The popular red velvet version of the Oreo is fun for the eyes and the mouth. The product was originally released as a limited edition in 2017, but became a regular product in 2019 after the original version ran out of stock. The Red Velvet Cookies have 1.5 times more cream than the original Oreo recipe cookies and the scent and taste are enhanced to enhance the flavor of the cream cheese.

“Oreo has been a national favorite for more than 100 years,” a marketing executive from Dong Suh Foods said in a statement. “Dong Suh Foods wishes to provide consumers with more exciting experiences by inventing trendy and diverse Oreo products.”

Bad credit or no credit: which is better?