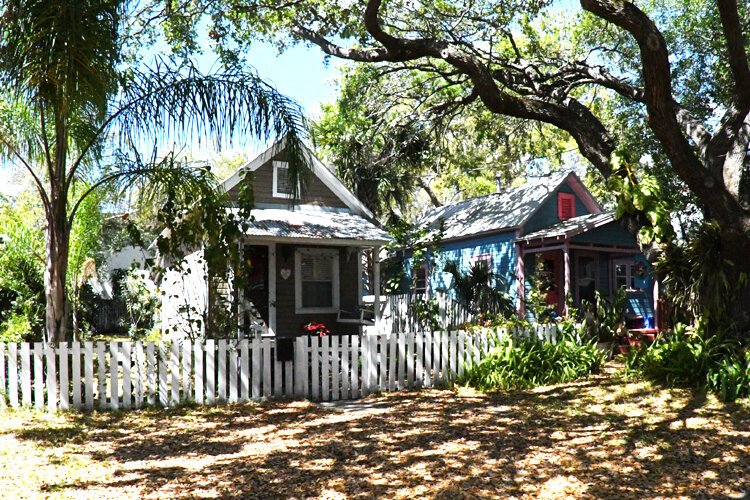 The Reverend Donald Leroy McBride says the Willow and Platt historical marker which tells the story of Dobyville, the black community in West Hyde Park, is in the wrong place.

It is on the edge of the neighborhood where the wealthy white residents of Hyde Park lived. West Hyde Park was where their servants, butlers, drivers and gardeners lived.

“We couldn’t have stood there and read that sign without being accosted by the police. ‘What are you doing here?'” said McBride, who grew up in the 1950s and 1960s.

He would like to see the marker moved to the heart of the former community of Dobyville.
McBride, 73, who is a pastor at a church in Perry, spoke of the close-knit neighborhood at a meeting Saturday of people who lived in the neighborhood. Many of them attended Dobyville Elementary School, where the teachers had a profound influence on McBride. The community was named for Richard C. Doby, a successful black businessman and real estate investor of the early 1900s. He donated the land for the school at 307 S. Dakota Ave., which opened around 1910 and closed in 1966. It was destroyed, along with many houses, to make way for the Crosstown Freeway, now known as Lee Roy. Selmon Highway.

Called Dobyville in the 1930s, people growing up in the 40s, 50s and 60s knew the area as West Hyde Park. The boundaries of the neighborhood were roughly from its northeast corner at Fig Street and North Willow south to Swann, west to South Albany, north to Kennedy, east to in Rome, north to Fig and then east to North Willow, according to Rodney Kite-Powell, director of the Touchton Map Library at the Tampa Bay History Center.

Part of Dobyville has been designated as a historic district, but the Hyde Park-Spanish Creek Civil Association hopes the designation will be expanded to include more of the old West Hyde Park.

A public hearing on the matter is scheduled before the Historic Preservation Commission at 5:30 p.m. on August 30 in the Tampa City Council chambers.

Neighborhood meetings began about six years ago, says Ben Foster, one of the key early organizers. But because of the pandemic, Saturday, August 20, was the first time in three years that these friends of seven decades or more were able to reunite. About 70 people attended the event at the Charles Davis Conference Center (College Hill) east of Martin Luther King Jr. Blvd. They sat at covered tables for a late lunch of Cuban sandwiches, chicken fried, meatballs, salads, cookies and cakes.

The meeting site is part of the College Hill Church of God in Christ, where Superintendent Charles Davis is pastor. Davis, 81, grew up in West Hyde Park, where her father was a pastor. He attended primary school in Dobyville in the 1950s and remembers the teachers being very strict about hygiene.

“At school, teachers were worried about your fingernails being clean, behind your ears your teeth were being brushed,” Davis says. “They would check it all out in the morning.”

And if the students misbehaved, they risked being picked up. Davis says he’s felt the sting of the paddle more than once for messing up.

Her childhood friend, Barbara Turner Henderson, says Davis would embarrass her so much when she visited his church.

“He was like, ‘I see Barbara here in the audience,'” she recalled. “And he was like, ‘She’s the only girl that beat me.'”

Henderson, 81, was born at 1321 North B Street in a house that still exists. She, her sisters and her brother were all born there, delivered by midwives. She describes herself as a “rough and tough” girl who annoyed her brother and his friends so much that they sometimes let her play football with them. She had come home with sand in her braided hair.

“I really wanted to be a boy.” said Henderson. “They had more fun.”

Although she played with dolls from time to time. She said the girls from the poor neighborhood would make their own. They would take a bottle of Frostie beer, untie the wrapper, and push the strands down the neck of the bottle, held in place by a Popsicle stick. Then they could comb the doll’s hair.

“We didn’t have a playground,” says her brother, retired pastor Leroy Turner Jr., 80.
They played soccer and baseball on the street.

“We played yo-yo, we played spinning top, we played four square, we played hopscotch, we played kick the box, hide and seek, cops and thieves, the jungle, all those games that we invented,” Turner recalled. .

It was a community of close neighbors, Davis says.

“We lived for each other and just cared about each other,” he says. “If I had a problem, you had it.”

Three strong churches attracted the bulk of the community and obviously shaped a number of future preachers. Yet another minister at the meeting, the Reverend Ernest Coney, 75, recalls that one of the biggest events of the year was the annual May Day celebration. The children were rehearsing the weaving of the colored ribbons to make the maypole, and it was a dress-up affair for them. Coney recalls his mother having a photo of him and his younger brother, Charles Coney Sr., 71, who was also at the meeting.

“She kept a picture of us, and we had our shirts and ties on,” he says. “It was a bow tie. It was very unique to me.

McBride congratulated the teachers at Dobyville Elementary and named each of them from grades one through six. His sixth-grade teacher, Gloria Lomas Philmore, is the one who influenced him the most.

“She always expected the best from us and would accept nothing but the best, especially for me,” McBride said. “I had a natural gift for speaking. She always encouraged me, didn’t let me shrink behind my back.

At the meeting, McBride would collate the old addresses of her neighbors in West Hyde Park to create a virtual map of where each lived. It’s heartbreaking that such a vibrant community has been destroyed by “eminent domain and revitalization,” he says.

“Crosstown was the beginning of the end,” McBride says.