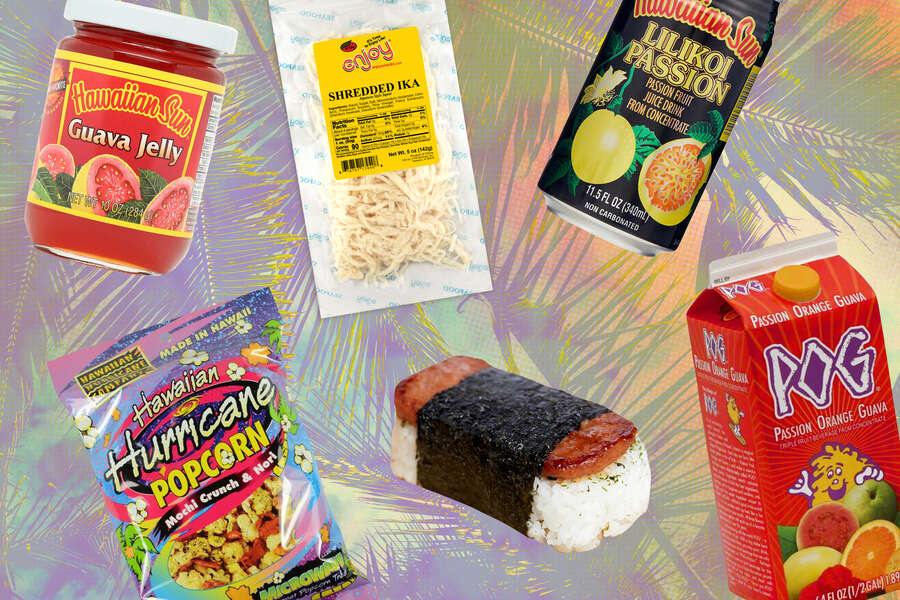 Best snacks and drinks to buy at a Hawaiian grocery store

Our favorite Hawaiian snacks and drinks

dried cuttlefish
Picking up a bag of pickled dried squid might not be your usual snack, but trust me: you’re going to love them. The squid is shredded and seasoned, and it has a bit chewy and jerky texture. Snacking on them like pretzels or fries is a great way to go, but you can also sprinkle them in things like soups. Or do as the native Hawaiians do and eat it with poi, an island staple made from pounded taro root.

Lilikoi Butter
This one is a kitchen staple you never knew you needed. Named after the Maui valley in which it was first grown, lilikoi is Hawaiian for passion fruit – that seedy, soft-pulped orb with a perfectly sweet-yet-tangy flavor and tons of antioxidants. Use it as an amped up butter for your toast, spread it on chicken or fish, bake it in cakes and cookies, make it into a pancake filling, or whisk it with rice vinegar for a vinaigrette fast. I even melted it to add popcorn. Yes, you are welcome.

hawaiian sun and Aloha Maid fruit drinks
There is a big debate among locals (and about Reddit Threads and in podcast episodes) to find out which canned fruit juice drink is the best. Facts: Both are made in Hawaii and both offer some of the same tropical flavors, including pineapple-orange and this liquid Hawaiian POG (a blend of passion fruit, orange, and guava juice) . And, yes, POG is entirely its own juice, made by Meadow Gold.

Hawaiian Sun is a bit more traditional and makes a wider range of flavors (including a standout lilikoi lychee). Meanwhile Aloha Maid boasts of its 100% natural drinks. The offerings of both are usually only about 6-8% juice, so it’s more of a sweet splurge than healthy juice, but it’s still a nostalgic sip that will make you feel like a kid…well. better than Capri Sun.

spam
If your only experience with spam is junk email and you’re willing to try the edible version, Spam musubi is definitely the way to go. A quarter-inch slice of the ham product on a rectangle of rice and wrapped in nori is one of Aloha State’s most iconic snacks.

Musubi is modeled after the Japanese onigiri, a rice ball that is traditionally filled with something sour or salty like pickled plums or cod roe. Many credit Barbara Funamura as the inventor of Spam musubi as we know it: covered in crispy slices of Spam, usually pan-fried in its own fat, glazed with a savory soy or teriyaki sauce, then placed over molded rice, sometimes sprinkled with furikake . . The result is an umami-filled hand-held treat you can take anywhere. You’ll never think of spam the same way again. To promise.

Kona coffee
Although coffee is not actually native to Hawaii, the beans have been growing there for hundreds of years since Chief Boki, the governor of Oahu at the time, first brought coffee plants from Hawaii. Brazil in the 1800s, initially planting them in the Manoa Valley of Oahu before others took seedlings in both Kauai and the island of Hawaii with more success. The latter produces the legendary Kona coffee, grown on steep slopes of mineral-rich volcanic slopes in the Kona district of the island, with a slightly higher elevation that allows for a microclimate of cooler air and perfect conditions for bean cultivation. It has arguably become one of the most renowned coffee growing regions in the world, with over 600 coffee farms on the island, most of them small family operations. The end product is known for its fruity and nutty flavor profile, but be sure to look for 100% Kona coffee over a blend, which may only use a small percentage of Kona-grown beans.

Li hing mui candy
Li hing mui candies may look like your gummy bears and sour candies, but look closely and you’ll see the electric orange exterior. A variety of li hing mui candies and dried fruits are mixed into a pickled plum powder, made from ground dried plums, giving the already sweet treats an extra kick. Most markets carry them bagged, while others may stock them as bulk candies in jars sold by the pound. Bonus tip: Grab a bag of powder on its own, which you’ll soon discover has a multitude of uses, from muddled into margaritas to sprinkled on fresh fruit.

Manapua
As musubi is Japanese onigiri, manapua is Chinese char siu bao, Cantonese buns traditionally steamed and filled with a mixture of barbecued pork in sauce. Hawaiians have put their own twist on the savory snack, and you might find them baked or even fried, then filled with an array of delicious fillings that go way beyond pork. Think garlic chicken or Okinawa sweet potato and even some offerings like pizza and a sweet stuffed version of Oreos. Whatever you choose, the fat and chewy Hawaiian snack is sure to satisfy.

Hawaiian Hurricane Popcorn
Full disclosure: I’m a popcorn fanatic. But not a popcorn purist. So I’m always on the lookout for new flavors and toppings, which is exactly where Hawaiian Hurricane shines. Popcorn is already the perfect balance of buttery and salty, but the mochi-nori version mixes corn with furikake seasoning and a mochi rice cracker. And if you want more heat, you can opt for the spicy kim chee offering which always includes nori and mochi. Surprising.

thrust
Since the poke “trend” exploded on the continent several years ago, you can find poke seemingly anywhere and, somewhat shockingly, on kale and quinoa. But we are talking about real Hawaiian poke. The kind you pick up by the pound in the deli crate. Find the right spot and you’ll often have dozens of seafood styles, sauces and options to choose from. avocado and covered with limu (indigenous seaweed). Go beyond tuna with thinly sliced ​​octopus called tako, or even mussel poke. And although many supermarkets use more affordable frozen fish, they often give you the option of paying extra for poke made from freshly caught fish.

Where to buy Hawaiian products

Most grocery stores carry many of the Hawaiian snacks and treats you are looking for. Hell, even Walmart is full of chocolate covered macadamia nuts and guava shortbread cookies pineapple shape. mother earthhowever, is a local supermarket chain in Hawaii popular for its wide range of Hawaiian products – poi (pounded taro), lau lau (pork, fish or chicken wrapped in ti leaves), huli huli seasoned chicken from the butcher’s counter.

For a cold case filled with various poke, by Tamura is among the best stores you can visit. Another local chain, Tamura’s isn’t a big grocery store, but it’s what’s inside that counts. If you are also looking for local beer and spirits, wine and a cigar, you will find it here. Weekly farmer’s markets hosted in communities across the islands are also a great place to eat fresh and local – you’ll find amazing fruit and preserves (yes, like that silky lilikoi butter) at these pop-up spots.

Cookies Market Size, Scope, Growth Opportunities, Trends by Manufacturers and Forecast to 2029 – This Is Ardee