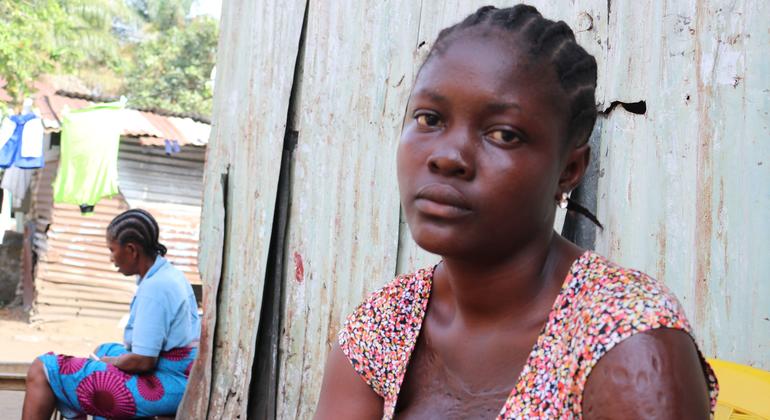 A Restoration Program with Future Prospects for Vulnerable Liberian Girls |

“My name is Agnes Kenderman. I am 19 years old and live in New Kru Town, Monteserrado County with my mother and son. My community selected me for the training program.

My mother is in poor health and my father died a long time ago during the civil war. I have an older brother. We didn’t grow much, we searched here and there for food and survived in the community, like everyone else, thanks to the hustle and bustle.

One afternoon, I think I was about five years old, and I was helping my brother fry some fish that our mother would later sell at the market. I don’t know what happened that day but before I know it,

I had fallen into hot oil. I’m lucky my brother saved me before my face got burned. I don’t know what would have happened to me.

Our mother was a merchant who sold fish, pepper and other small things like vegetables if she had any. I cooked and took care of the house when she was at the market, and my brother and I didn’t go to school.

She married another man after our father died. He was not nice to us at all and he drank a lot of alcohol. I remember how he beat our mother several times.

It was painful and I was still calm and afraid of him, but my brother was trying to stop him from beating our mother, and he would turn around and hit my brother hard. Whenever he or anyone tried to harass me, my brother protected me.

After about five years, he decided to leave us alone. Then our mother fell very ill and she could no longer support the family, life was hard.

Now my brother is married with his own wife and children. He had to move on his own. And now I’m the only one looking after our mother here, and also my son.

Agnes-Joséphine Kenderman and her son outside her home in Liberia.

Cooking for a better future

My life has improved since I was selected to participate in this program. I’m much happier and getting respect from the community.

I learned catering – which is cooking, making bread, shortbread, cookies, pastries and different things. I trained for three months. After the training they gave us flour, oil, butter, sugar, milk, yeast, flavoring, measuring cups, baking powder and milk. These articles lasted a month.

You had to get up very early in the morning to go to the training center. But when I thought about what the training would make me tomorrow, the benefits for me and my family, I quickly got up and ran!

In the future, I want to continue learning. I’m really interested in making cakes and icing for cakes for weddings and birthdays, and I also want to cook special fried rice and salads.

People love to eat and if you make something sweet and tasty they will come back again and again. At Christmas and New Years, I made so much money from sales!

This training allowed me to be independent. I can now support my family with money and other expenses”.